Since 2013, I’ve published two writing guides. Both were edited/formatted/published by KMR Publishing (aka my pal Kelly). DIY Chick Lit has been on sale on Amazon and Smashwords (which distributes to Barnes & Noble’s Kobu and other ebook platforms) since November 2013. DIY Writing Retreat went on sale on Amazon 10 months later in September 2014.

fun fact! I did nothing to publicize DIY Writing Retreat (except tweet/post on my blog) and it still made #1 http://t.co/DIvw5oG4eH

The biggest reason we didn’t publish DIY Writing Retreat on Smashwords is that formatting for Smashwords takes for. ev. er. It was by far our biggest challenge. On Amazon, you can just upload a PDF.

In January of this year (2015), I took my exclusivity on Amazon a step further and enrolled both books in KDP Select. KDP Select is a program that lets readers who participate in Kindle Unlimited (a pay-per-month program) borrow books for free on their Kindles. It also lets writers put their ebooks on sale for a limited time, or offer them for free. All this in exchange for total loyalty to Amazon; your book (in ebook format) can’t be for sale anywhere else for 90 days.

I wanted to try KDP Select because I’d listened to a talk by Ingrid Ricks at PubCamp, a conference in Seattle. Ricks achieved awesome self-publishing success and her memoir, Hippie Boy, was eventually picked up by a traditional publisher. Ricks attributed some of her success to giving away her books for free online, which led to more readers and more sales of her other books. I’ve read about KDP Select success in other places, but seeing Ricks (and emailing with her–she is super nice!) convinced me to give it a shot.

Another reason I wanted to try KDP Select is that Andrew gave me a Kindle for Christmas this year, and it came with a trial membership to Kindle Unlimited. I ended up using it to read a fair number of books, and I noticed I was disappointed when I saw that some of my favorite authors didn’t participate in it.

Armed with an experimental mindset and few expectations–I sell a few copies of both books each month–I enrolled both books in KDP Select (and unpublished DIY Chick Lit from Smashwords).

Borrows replaced sales. In KDP Select, writers are paid from a pool of money set aside for Kindle Unlimited borrows. So, every borrow earns me some cash, even though I don’t sell my book to Kindle Unlimited users. I noticed right away that many of my sales–more than half–were replaced with borrows. This might seem like it matters, but in terms of cash, I am right on track with my quarterly earnings compared to last year.

I gave away more than 800 copies of my books. I ran two promos: on Valentine’s Day weekend, I offered DIY Chick Lit free, and on the last weekend in March, I offered DIY Writing Retreat for free. Both times, I gave away 400+ copies of my book. I plan to write more about this in a separate post, but the short story is that I didn’t do much in the way of marketing or advertising for these promos: I tweeted about the sales, shared them with my newsletter list, and posted a link on the blog. 800 copies is not much in Bookland, but it is still many times my monthly sales, and it was fun to see my books make #1 in their respective categories.

fun fact! I did nothing to publicize DIY Writing Retreat (except tweet/post on my blog) and it still made #1 http://t.co/DIvw5oG4eH

My sales have not changed dramatically. The chart of my sales before and after the giveaways looks about the same: a few sales each month.

So what are my takeaways from all this?

KDP Select isn’t a magic bullet, but it does increase your readership. Even if only 10% of my free ebook downloads get read, that’s 80 more readers than I had last year. (I like to think my books have a better chance of getting read because they are short–but it’s hard to say.) More readers means potential for more reviews–though so far, I only have one new review for DIY Chick Lit–plus more visits to my website and more subscribers to my newsletter. I read all of those stats as more readers who are willing to read my writing elsewhere, and perhaps to buy another book down the road.

I’m not *sure* KDP Select is worth it, but so far, it hasn’t been doing any damage to my sales. Quarterly royalties are the same this year as they were last year, so if anything, KDP sales have increased slightly, since I’m no longer on Smashwords. This actually seems like pretty good reason to go back to Smashwords–I’m missing out on the royalties I earned from there last year (which made up about 15% of my total royalties, nothing to sneeze at). 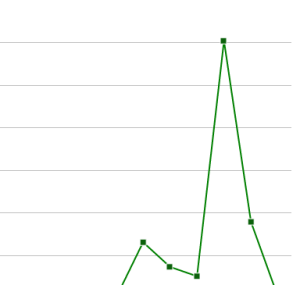 I haven’t decided yet what to make my next book-selling experiment. I have a few ideas, including introducing an e-course companion to DIY Writing Retreat. But this has been more fruitful than I could have possibly expected; seeing a massive spike in “sales” came as encouragement I couldn’t have expected after a slow year of drips and drabs.

This site uses Akismet to reduce spam. Learn how your comment data is processed.

About
Welcome! I'm a writer based in Maine, where I live with my family and a black cat. I love flowcharts, DIY, murder mysteries, and Indiana Jones.
Search
Sign up for Scratch Paper, a writing-related newsletter
Archives